Once again, the South Korean government just decided to lift the suspension of the imported US beef . 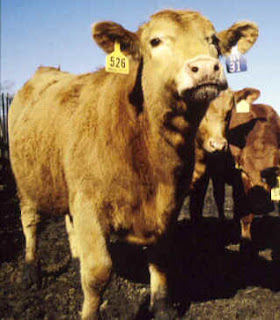 A ruling party spokeswoman told reporters on June 24: "At the high-level party-government meeting today, it was decided that the agriculture minister will request the publication of the legal notice today and it will be published in the government newsletter tomorrow."

Once that happens, US beef that has been in cold storage in South Korea for months could then be sent for sale.

Korean President Lee Myung-bak, who took office in February, said that he backed the deal to help secure passage of a free trade agreement with the US, thus boosting South Korea’s economy.

It seems that he thinks that all the public will be convinced from the televised apology he made last week.

But will this replace the possibility of new infections of mad cow disease? I doubt. We only see a spokesman of the ruling party, or the ministry of agriculture or even the president himself talking and apologizing; but we did not see the minister of health; he did not appear to say anything useful about this crisis.

So what’s the point of the governmental resignation that has been declared few weeks ago, if the government itself did not learn from the strong opposing protests? Was it all just a drama played by the government and the president?

The aim of the American and South Korean government is only the highest supply and demand that can be gained; no matter the status of public health.

The government will politically pay a lot — over and over again — if they ignored public health.

Koreans know very well that Mr. Lee is not the right person to rule their country. He is even on record as saying he is "the CEO of South Korea." I do not think that South Koreans refer to themselves as employees. We are not here in a country that is ruled by a totalitarian regime. It should regain its democracy again.

Koreans also know that the imports of the US beef was not going to be ended, instead it was only suspended to convince Koreans that everything is under control and in the public’s best interests. But it just was a temporary suspension to remedy weeks of demonstrations and opposition to the government.

Again, the president wants to concentrate on the economy rather than public health. But unfortunately, he failed in both. He vowed to bring economic growth of 6 percent to the country in 2008 — but instead the country is battling a global downturn and surging inflation. That’s why he also could face a backlash over worsening economic conditions in Korea.

Koreans should ask the government why it wants to keep importing the US beef? As Americans themselves do not consume beef that is older than 30 months. And Europe as whole do not accept at all the US beef. It seems that only the American and South Korean governments will benefit from this agreement. But for sure not the public who want to feel safe.

The united states should work on gaining trust and respect from the world. But working only on gaining big economic supplies, will create a lack of trust in the US government within Koreans.
They also stop trusting their own government.

Finally, koreans should not forget that South Korea’s ruling party suffered a heavy defeat in its first electoral test since President Lee took office, amid a row over the beef imports. And the government also should think about what is beneficial for its citizens to prevent any future crisis that could possibly re-affect the government itself and the country’s democracy.
Posted by Ahmed El Hadeka at 8:02 AM No comments:

Each page contains just one article.
To see other articles, click on "Older Posts" on the bottom of this page.